Aftermarket Scores Another Win – Canon loses: zero degrees is not an angle — printnews.biz/en 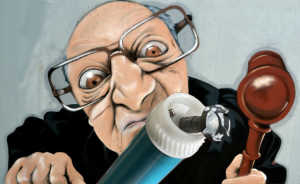 Only days after hearing oral arguments in the matter, the U.S. Federal Circuit Court of Appeals unanimously decided on April 20 against Canon in its case of infringement against several aftermarket players, including Aster, Ninestar, Print-Rite, LD Products, and The Supplies Guys.

It found in favor of the U.S. International Trade Commission (USITC). The issues were presented to the USITC in “In the Matter of Certain Toner Cartridges and Components Thereof” involving Canon’s infamous dongle gear.

Canon had asserted that its patents could be interpreted to include language that would have deemed the aftermarket defendants’ workaround solutions infringing. The USITC disagreed with Canon and found that it had overreached in using its patents in this manner and that the aftermarket workarounds did not infringe.

Canon appealed to the U.S. Federal Court of Appeals. Ten days ago, oral arguments were heard in the matter and were reported on by David Gibbons.

In its oral argument, and among other arguments it made, Canon’s lawyer argued that its patent’s description of an angle also included a zero-degree angle or a straight line. That’s a tough argument to make.

It comes as no surprise that the Court found unanimously in favor of the ITC in this matter, and chose to affirm its decision in favor of the aftermarket’s position.  This leaves Canon’s civil cases in jeopardy, as they were stayed pending this proceeding.

However, Canon could try for a “hail-Mary pass” and request an audience with the U.S. Supreme Court.  It has the war chest to do so, but the issue may not be of sufficient interest for the U.S.’ highest court to deem worthy of a review.  So continue to  hang on to your dongle gears.